A Maharaja’s Turf: Collector’s edition on the triumph of Maharaja Sir Vijaysinhji of Rajpipla in the Epsom Derby of England in 1934 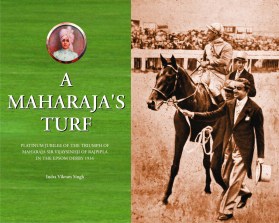 The Book : This is the story of the exhilarating victory of Maharaja Sir Vijaysinhji of Rajpipla in the Epsom Derby of England in 1934, the only Indian owner to win the blue riband of the turf in its history dating back to 1780. The dapper Indian prince’s horse Windsor Lad left the hitherto undefeated favourite Colombo trailing in third place in the presence of royalty led by King George V and Queen Mary, and a multitude of an estimated quarter to half a million people on that damp afternoon of 6th June. The triumph earned the Maharaja a unique hat-trick of Derby victories as he had already clinched the first Indian Derby at Calcutta in 1919 with his horse Tipster, and the Irish Derby at Curragh in 1926 with Embargo.

The enthralling tale recounted by the Maharaja’s grandson Indra Vikram Singh offers an insider’s insight, and is embellished with rare media photographs of the race and from the Rajpipla royal family collection over many generations. It has been extensively researched from about 80 newspapers and magazines of 1934, five books and websites, and carries articles by the Maharaja himself. There are news reports, cartoons and caricatures which open out a whole new world. Featured are the British royal family, the Aga Khan, Maharaja Man Singh II of Jaipur and the leading racehorses, owners, trainers and jockeys of the day, among other eminent personalities.

The book captures the era between the two World Wars, of imperial times and a royal lifestyle, also going back centuries into history, connecting the past and the present and depicting the march of time, even as the thrilling race remains the central theme. It unfolds the tale of the uncanny prophesy of Gipsy Lee, the several coincidences around the number 13, the defeat of a ‘super-horse’, and the unrelenting quest of a prince to realise his dream that is bound to keep the reader transfixed.

The author Indra Vikram Singh can be contacted on email singh_iv@hotmail.com. His blogs http://www.indravikramsingh.blogspot.com and http://www.singhiv.wordpress.com offer an insight into his work, his family and heritage.

Chapter 6 : A time to celebrate

Chapter 10 : Charlie Smirke: dashing rider with a point to prove

Chapter 19 : Special postal cover to commemorate the platinum jubilee of the Derby triumph