The Big Book of World Cup Cricket: A definitive coffee-table collector’s edition on the ICC World Cups 1975 to 2011 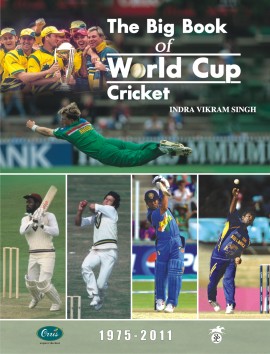 The Book : The Big Book of World Cup Cricket is a definitive, fully-illustrated all-colour collector’s edition that contains virtually everything about all the cricket World Cups from 1975 to 2011.

Beginning with a story of every tournament from 1975 to 2007, including the commercial facet, sponsorship and prize money, logos and mascots, it carries a preview of the 2011 event as well. There are highlights and sidelights, drama and controversy, and the stars of the biggest event in One-day cricket.

The statistics sections comprise a wide range of records, and performances of all the 19 teams that have appeared in the first nine editions of the World Cup, detailed scorecards of all the 303 matches played from 1975 to 2007, and batting averages, bowling averages and fielding data of all the 823 players who turned out in the premier event.

The tailenders bring forth the lighter moments and trivia. As many as 250 photographs, mostly in colour, from the world’s leading photographers and agencies Patrick Eagar, Getty Images and Pradeep Mandhani embellish this mammoth effort.

The piece-de-resistance is a handwritten letter of Sir Donald Bradman received by the author in 1999, which led him to dedicate the book to The Don.

The author Indra Vikram Singh can be contacted on email singh_iv@hotmail.com. His blogs http://www.indravikramsingh.blogspot.com and http://www.singhiv.wordpress.com offer an insight into his work, his family and heritage.