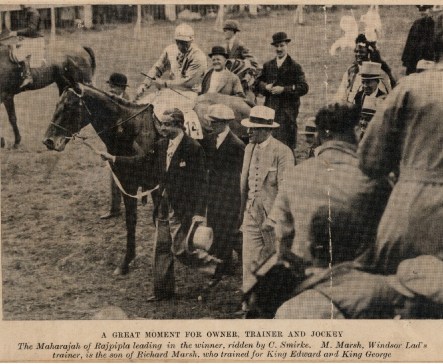 There was a buzz around Windsor Lad, my grandfather Maharaja Sir Vijaysinhji of Rajpipla’s horse, before the Epsom Derby of England in 1934. The colt was only third favourite to the unbeaten Colombo and Easton. But there was an intriguing tale that had everyone transfixed.

Way back in 1868, a young lady by the name of Mrs. Boswell, popularly known as Gipsy Lee, made a forecast that no horse with a ‘W’ in its name would win the Derby until a year after her death. The story goes that a peer, as he walking past Gipsy Lee just as the Derby of 1868 was about to start, asked her to predict which horse would win. She was wearing a blue dress and replied, “Look at my frock.” The brusque lord told her to write it down, and she scribbled, “Blew Gown”. As it happened, Blue Gown won that Derby.

Just as he was passing by again, the aristocrat threw a sterling at Gipsy Lee and scoffed, “Go learn some spelling.” Miffed at this condescending behaviour, the furious soothsayer shot back, “You will not live to see another Derby and no horse with a ‘W’ in its name will win the Derby till the year after I die.”

Gipsy Lee lived to a ripe old age and during her lifetime no horse with a ‘W’ in its name was able to wrest the Derby, even though Orwell and William IV were heavily fancied. She died in 1933.

This is no apocryphal tale, for 1934 being the year after her death and Windsor Lad being one of the fancied horses, though not the favourite, there was incredible excitement all around.

Everyone from the racegoers to the mammoth media contingent was abuzz with the prophesy of Gipsy Lee. Would her prediction come true, was the question? And so it came to pass that Windsor Lad did indeed triumph. The non-believers were nonplussed, the believers were jubilant.

Whether this was a quirk of fate, or whether Gipsy Lee was actually psychic, it is hard to say. The fact is that her prophesy did come true.

(This is an excerpt from my book ‘A Maharaja’s Turf’).