Kumar Shri Samarsinhji, younger son of Mokhdaji Gohil, Chief of Ghogha in Gohilwar, Kathiawad, succeeded his maternal grandfather Chokrana Parmar to the gadi of Rajpipla around 1340 A.D. He assumed the name Arjunsinhji, the first Gohil Rana of Rajpipla. The Gohil Rajput dynasty ruled this principality, lying in the hills of the western Satpuras and the plains of the Narmada and the Tapti, for 600 years but it was not an easy task to hold on to their territories for such a long period.

In 1403, Rajpipla under Rana Gomelsinhji, grandson of Arjunsinhji, was overrun by Sultan Muhammad I of Gujarat. He was forced to flee his capital Junaraj on Devastra hill, deep in the forests of the Satpuras. Rana Gomelsinhji, who had allied himself with the rulers of Idar and Champaner, invited Sultan Hoshang Shah of Malwa to invade Gujarat, then ruled by Sultan Ahmad Shah I. But there was defeat again at the hands of the army of Sultan Ahmad Shah at Modasa.

Rajpipla was attacked again by Sultan Ahmad Shah I of Gujarat in 1431. Gomelsinhji’s grandson Rana Harisinhji was also forced to flee his capital. But he was a brave ruler and he reconquered his territories in 1443, in alliance with Sultan Hoshang Shah of Malwa, despite being in exile for 12 years. This was at a time when Sultan Ahmad Shah’s successor, Sultan Muhammad Shah II, was preoccupied in fighting against Mewar and Champaner. For nearly a century-and-a-half after the reconquer of the territories, the principality of Rajpipla held a very independent position.

Trouble came when Maharana Bhim Dev of Rajpipla helped Prince Latif Khan, half brother of Sultan Bahadur Shah of Gujarat. In the ensuing battle in 1526, Bhim Dev was killed.

To avenge the killing of his father, Maharana Raisinhji plundered Dahod. A punitive expedition sent to Rajpipla ravaged the area for several months without much success.  The submission seems to have been token as Rajpipla mercenaries (Bhil and Koli feudatories)  attacked Bahadur Shah’s troops, unaware that this army was taking Sultan Mahmud Shah Khilji of Malwa in captivity to Champaner after the capture of Mandu on 25 May 1531. In this attack, Sultan Mahmud Shah and his sons were also killed. The next year Bahadur Shah himself led the field and secured Rajpipla’s submission.

After the fall of Chittor in 1567, Maharana Udai Singh of Mewar sought and received shelter in Rajpipla which was then ruled by its eleventh Gohil chieftain Maharana Bhairavsinhji. Reference to this can be found in ‘Veer Vinod’.

Ironically, the next ruler Maharana Pruthuraj ji gave refuge to the last Sultan of Gujarat, Muzaffar Shah, incurring the wrath of Emperor Akbar. The Imperial troops led by Mirza Khan Khas took Gujarat in 1584. Akbar then levied a tribute of Rs.35,556 on Rajpipla, along with a contingent of 1,000 men to be furnished to the Mughal army. The district of Nandod in the plains was granted to Haider Kuli Khan. This arrangement continued till the last years of Emperor Aurangzeb’s reign when the payments not only became irregular but were altogether evaded when possible.

The 26th Gohil ruler Maharana Verisalji I came to the gadi in 1705. With the weakening of the Mughal Empire, Verisalji I asserted his independence and the same year laid waste south Gujarat. A force sent by Aurangzeb was defeated in alliance with Maratha general Dhanaji Jadhav at Ratanpur. Having been on a pilgrimage to Ujjain, Verisalji I brought an incarnation of the Kul Devi or family deity of the Gohil clan Shri Harsiddhi Mataji and installed Her in Rajpipla.

His son Maharana Jeetsinhji forged a treaty with Maharaja Peelaji Rao Gaekwar and succeeded in wresting Nandod (New Rajpipla in the plains on the banks of the river Karjan, now modern town of Rajpipla) in 1730 and transferred the capital there.

Allies now turned foes during the rule of his successor Maharana Pratapsinhji as the Marathas under Damaji Rao Gaekwar overran Rajpipla and exacted tribute. Upon his death in 1764, the mantle passed on to his son Raisinhji. In 1764, a neice of young Maharana Raisinhji was espoused to Damaji Rao Gaekwar, who renounced part of the tribute. Raisinhji died in 1786 without male issue, and was succeeded by his younger brother Ajabsinhji.

It was a trying time as Umed Vasava, the Bhil chief of Sagbara revolted in 1793, and the Gaekwar raised the tribute. Internal power struggles led to interference and arbitration by the Gaekwars. With the intervention of British Agent Willoughby, Maharana Ajabsinhji’s third (and second surviving) son, Naharsinhji was appointed Regent, also in 1793. Ajabsinhji died on 15th January 1803.

He was succeeded by his second and eldest surviving son of Ramsinhji. Following differences with his father, Maharana Ajabsinhji, he had moved to Mandwa. Then with the help of the Chief of Mandwa had attacked Rajpipla but was defeated. He fled to Mandwa. On a promise of pardon, Ramsinhji returned to Rajpipla but was imprisoned at the Fort, while his younger brother Naharsinhji was appointed Regent. On the death of Maharana Ajabsinhji, the soldiers refused to accept as ruler the younger brother Naharsinhji. Ramsinhji ascended the gadi on 30th January 1803 at Junaraj.

When Maharana Ramsinhji died on 10th May 1810, Naharsinhji once again asserted his claim. A period of family intrigue followed. Maharana Ramsinhji’s widow Rani Surat Kunverba, daughter of the Chief of Mandwa, tried to place their putative son Pratapsinhji on the gadi. Meanwhile Naharsinhji had contracted smallpox in the epidemic of 1803, resulting in blindness and making him ineligible to rule, according to ancient Rajput tradition. Seizing the opportunity, Maharaja Gaekwar of Baroda raised the tribute payable by Rajpipla and took over the administration of the State. The Gaekwar was in no hurry to settle the dispute and his officers mismanaged the affairs of Rajpipla. Ultimately the British authorities intervened again, and after a detailed enquiry decided that Pratapsinhji was not Maharana Ramsinhji’s son. They ensured that Naharsinhji’s son Verisalji succeeded to the gadi on 9th August 1821.

Barely 13 years of age, Verisalji II was installed as ruler on 15th November 1821 at Junaraj. He entered into an engagement with the British, binding himself and his successors to act in conformity with the advice of the British government. The Gaekwar gave up his claim. By 1825 a final settlement was reached with the Gaekwar. It was decided that a sum of Rs.7,30,000 (₤ 73,000) would be payable to the Gaekwar, and disbursed by 1833-34.

Verisalji II inherited a troubled legacy. His rule began in the backdrop of the great flood in the Narmada in September 1821. At the same time, a general uprising of the Bhils took place under the Chieftain of Sagbara, Rai Sinh of Rahooba, and Baiji Damia of Tilakwada. This was contained in 1823. Soon there was an uprising in Khandesh, which was quelled.

Rajpipla under Maharana Verisalji II rebelled against the British during the Mutiny of 1857. It is said that Tantia Tope was co-ordinating the revolt in the entire area comprising Rajpipla, Godhra and Dahod. Rajpipla State was out of control of the British for many months before the Mutiny was quelled.

In 1858, power passed from the East India Company to the British Crown. The Bhils of Sagbara rebelled yet again in 1859, and were finally suppressed in 1860. Verisalji II abdicated in favour of his son Gambhirsinhji on 17th November 1860. Apparently, the abdication of Maharana Verisalji II came about as a result of pressure from the British for the revolt during the Mutiny. A heavier price was paid by the Dewan of Rajpipla who was executed by the British. Maharana Verisalji II died at Nandod in 1868. 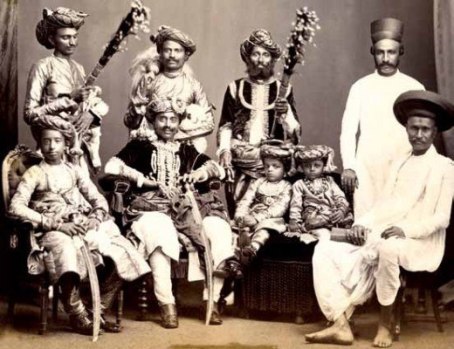 Maharana Gambhirsinhji, 34th Gohil Rajput ruler of Rajpipla, with his eldest son Yuvraj Chhatrasinhji on his right, two younger sons and courtiers in 1875.

Under the paramountcy of the British crown, the Indian rulers were relieved of the threat of external aggression and could devote their energies to development works and reforms. Maharana Gambhirsinhji, though, had an uneasy relationship with the British. Having reigned under a Council of Superintendence until he came of age, he was invested with full ruling powers in 1863. Unhappy with the financial management, the British placed the State under the joint management of its own officer along with State officials in 1884. A sole British administrator assumed charge of affairs in 1887.

With the accession of Maharana Chhatrasinhji in 1897 began the last half century of the rule of the Gohil Rajput dynasty over Rajpipla. It was a period of benevolent reforms and development works under him and his son Maharaja Vijaysinhji. They are evident all over Rajpipla even today, but they camouflage the tremendous struggle faced by the courageous Gohil rulers to keep intact their rule over such a long period. It was indeed the clichéd crown of thorns.