Centenary of coronation of Maharana Vijaysinhji, the 36th Gohil Rajput ruler of Rajpipla, on 10th December 2015

A glorious final chapter in a valiant 600-year saga 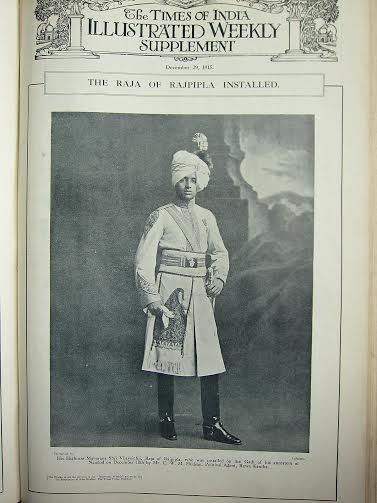 The Times of India Illustrated Weekly supplement on the coronation of Maharana Vijaysinhji as ruler of Rajpipla.

Yuvraj (Crown Prince) Vijaysinhji was just 25 years old when his father Maharana Chhatrasinhji of Rajpipla passed away suddenly at Poona on 26th September 1915. After the period of mourning was over, the accession of Vijaysinhji on the gadi (throne) of the principality of Rajpipla took place on 10th December. His coronation as the 36th Gohil Rajput ruler, in a line going back to the 1340s, was held at the Fort, Junaraj, the old capital of Rajpipla.

Educated at Rajkumar College, Rajkot, and having undergone military training at Imperial Cadet Corps., Dehra Dun, Maharana Vijaysinhji began discharging his duties with alacrity and foresight. A day before his official coronation, the foundation stone of the Rajpipla Civil Hospital was laid in memory of his father Maharana Chhatrasinhji. The imposing hospital with contemporary facilities was ready in 1919. The great ruler of Baroda, Sayajirao Gaekwad was invited to inaugurate it. Maharana Vijaysinhji also built five regional dispensaries and a veterinary hospital.

The dynamic young potentate extended the State railway line – set up by his father – from the old station right into Nandod, the capital town, by building a magnificent iron bridge over the River Karjan. It was inaugurated by Lord Willingdon, the Governor of Bombay, in 1917.

Agriculture and animal husbandry improved substantially during his reign through the implementation of drought and flood relief programmes. In the scarcity year 1918-19, he granted liberal remissions and suspensions amounting to Rs.3,00,00. Another Rs.4,00,000 were spent on relief works and gratuitous doles. Farm yields grew with modern farming methods, introduction of new varieties of seeds, and improved quality control. The quality of cotton, grains and fruits were improved. Short-stapled Ghoghari cotton was eliminated, and long-stapled 1027 A.L.F. (farm cotton) introduced. As a consequence, the reputation of Rajpipla cotton was built in Bombay and other cotton markets. The land revenue system was regularised.

Bestowed the British title of Maharaja on 1st January 1921, with gun-salute increased to 13, he began to be popularly known as Maharaja Vijaysinhji.

The civil and criminal justice systems were reformed during his rule. A salaried civil service was introduced, together with a system of retirement pensions, which did much to eradicate corruption. The salaries of the army and police were increased. A widow fund was set up.

Having introduced free primary education, affordable secondary education, and scholarships of Rs.6,000 per annum for technical and collegiate education, Maharaja Vijaysinhji constructed the huge, stately high school on a small hillock in the early 1930s. 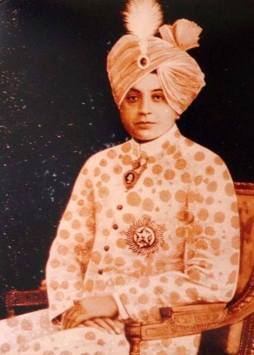 The visionary ruler introduced town planning methods which, as early as 1927, was far-sighted. He built a modern bazaar with a wide central avenue, with permission to construct, conditional to leaving 3 to 4 feet (about 1 metre) space for future widening of roads. The designs of new buildings were well integrated and in harmony with the surroundings. He had a beautiful public garden laid out, and provided congregation centres for various communities. A vast guest house hosted his large number of European guests during the winter.

The Maharaja set up a 12-mile railway line between the Narmada bank near Jhagadia – on the Rajpipla-Ankleshwar line – and Netrang, which was completed by the year 1932, increasing the network to 62 miles. He also constructed a 19-mile steam railroad, and a tramway connecting the towns along the Narmada with villages in the interior.

An extensive network of good motorable roads was constructed. Interestingly, for one who preferred sea voyage, Maharaja Vijaysinhji had an airstrip laid out on the outskirts of Rajpipla town, on which small planes landed as early as the 1930s right by the banks of the River Karjan. He had plans to convert this into a 150-acre aerodrome.

Maharaja Vijaysinhji constructed a power house supplying electricity and water to Rajpipla town. He wanted to build a dam across the Narmada to generate electricity, supply drinking water and for irrigation, and was in the process of raising finances for the project. The State was merged before his dream could be realized. But it was a precursor to the modern Sardar Sarovar Dam, which has become a lifeline for the people of Gujarat and Rajasthan.

Sports were made compulsory for students in Rajpipla State. The dhaba ground hosted several sports like cricket, football and hockey. Maharaja Vijaysinhji built a club, named Rajpipla Gymkhana, which was inaugurated by Lord Willingdon, on 26th February 1917. There was a polo ground beside, which was subsequently built upon after merger of the State. A unique feature of the Rajpipla royal family was its polo team comprising Maharaja Vijaysinhji and his three sons Yuvraj Rajendra Singhji, Maharajkumar Pramod Singhji and Maharajkumar Indrajeet Singhji. 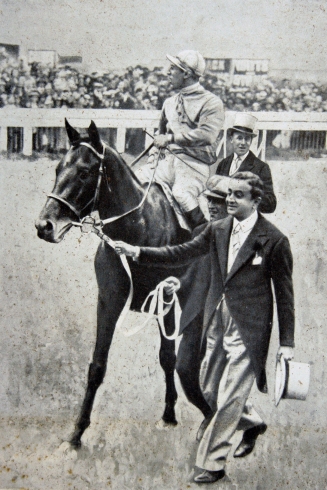 Maharaja Vijaysinhji leading his horse Windsor Lad after winning the Epsom Derby of England in 1934.

A keen horseman, Maharaja Vijaysinhji maintained one of the finest stables of race horses in India and England, marked by quality and not quantity. His thoroughbreds won several prestigious races, including the first Indian Derby in 1919 (Tipster), the Irish Derby in 1926 and Belgian Grand Prix in 1927 (Embargo), and the blue riband of the turf, the Epsom Derby of England in 1934 (Windsor Lad). Maharaja Vijaysinhji is still the only Indian owner to have bagged the English Derby, considered the greatest horse race in the world, cheered on by an estimated quarter to half a million people which included King George V and Queen Mary of Britain and other members of the royal family. Maharaja Vijaysinhji thereby completed a brilliant hat-trick of Derby wins: the first-ever Indian Derby, the Irish Derby and the coveted Epsom Derby of England, making him arguably the greatest-ever Indian racehorse owner.

Having a passion for cars like his father, Maharaja Vijaysinhji owned, among other top makes, twelve Rolls-Royce cars, from the Silver Ghost 1913 to the Phantom III 1937.

Maharaja Vijaysinhji of Rajpipla was one of the first rulers to merge his State with the Union of India, which was an eloquent testimony to his patriotism and sagacity.

Shri V.P. Menon, working under Sardar Patel as Secretary of States in the Government of India, wrote on page 142 of his book ‘The Story of Integration of Indian States’, “I went to Bombay on 17 March 1948. I had an informal meeting with the rulers. The first thing I did was to announce that the formal meetings with the rulers of the full jurisdictional States would be held not in the Bombay Secretariat, but at the residence of the Maharajah of Rajpipla (on Nepeansea Road). This had a good effect. We met continuously for three days, the discussions generally extending into the late hours of the night”.

Elaborating further, Shri Menon observed on page 143, “After these discussions, the late Maharajah of Rajpipla expressed on behalf of the rulers their desire to integrate their States with the province of Bombay and made the following statement: (Exact words of Maharaja Shri Vijaysinhji of Rajpipla) “We have the pleasure to inform you that, as rulers of Gujarat States, we believe our Mother Country and particularly Gujarat looks up to us to make all sacrifices in the wider interests of India as a whole. We, therefore, have cheerfully responded to the call of duty and decided to take the first step in forming the province of Maha Gujarat by integrating our States with the province of Bombay. We invoke God’s blessings on our decision”.

Maharaja Vijaysinhji had himself ruled for 32-and-a-half years and carefully nurtured his beloved Rajpipla. He created a huge amount of infrastructure that still stands tall, and carried out sweeping benevolent reforms. There is no doubt that he merged the State with a heavy heart, but he did so readily, leaving behind Rs. 28,00,000 in the treasury. Quick to fathom the winds of change, he also prevailed upon his fellow rulers to emulate his example. An era came to an end, never to return.

(Indra Vikram Singh, grandson of Maharaja Vijaysinhji of Rajpipla, can be contacted on email teddy.rajpipla@gmail.com).

9 thoughts on “Centenary of coronation of Maharana Vijaysinhji, the 36th Gohil Rajput ruler of Rajpipla, on 10th December 2015”