On a day when Shikhar Dhawan scored a Test century before lunch, a look at Don Bradman’s feat in the Leeds Test of 1930. Excerpt from Indra Vikram Singh’s book ‘Don’s Century’

Don Bradman being applauded after reaching his century before lunch on the first day of the Ashes Test at Leeds, 1930.

It was Tate again who should have bowled Bradman with a vicious in-cutter for a duck at Headingley. “My first ball missed the off-peg by a coat of varnish,” rued Tate. Wicketkeeper George Duckworth threw up his hands in jubilation only to let the ball through for four byes. Bradman had walked in to face the twelfth ball of the match after Archie Jackson had been dismissed cheaply.

Unfazed by the close shave, Bradman went on the attack. He reached his fifty in 49 minutes, out of a total of 61. His partner Woodfull was, for the most part, a bystander. The Australian hundred was up in 80 minutes, with Bradman on 81 and Woodfull 17. The skipper did the sensible thing, taking singles and giving his young star most of the strike. Bradman pulled Larwood to reach his hundred, fourth in consecutive Test matches. At lunch he was on 105, with Woodfull having advanced to 29, out of a total of 136. Only two others had hit up a century before lunch on the first day of a Test, both Australians against England, Victor Trumper at Manchester in 1902, and Charlie Macartney, who like Bradman had Woodfull as partner on the same ground at Leeds four summers earlier in 1926. Pakistan’s Majid Khan joined the club in 1976-77 against New Zealand at Karachi.

Woodfull departed at 194, having reached a customary sedate 50. Bradman rattled up the fastest Test double century in 214 minutes, quicker than Trumper’s 226-minute effort against South Africa at Adelaide in 1910-11, and his own 234 minutes of brilliance in the previous Test at Lord’s. It is reckoned that Bradman played uppishly only twice, when he was on 141 and 202, eluding mid-on, but was otherwise in total command. By tea he was on 220, his partner now being Alan Kippax. Bradman got his first chance of the series after 15 hours of batting when the weary Duckworth dropped a difficult one off George Geary. He was then on 273. With Kippax he put on 229 for the third wicket.

Bradman reached his triple century in 336 minutes. It is still the second-quickest ever recorded in terms of time after Hammond who clocked up the coveted figure in 288 minutes against New Zealand at Auckland in 1932-33. At stumps The Don was unbeaten on 309, the only instance in Test history of a batsman scoring three hundred runs in a day. Australia were 458 for three. During the course of this exciting day, Bradman passed 1000 runs in only the 13th innings of his 7th Test match.

That evening Bradman noted: “My feet are awfully tired, but I could have gone on if it hadn’t been the close. I am happy to have beaten the record (Englishman R.E. Foster’s 287 in Ashes contests), but happier still to think Australia is in such a good position. I believe I have been credited with the intention of going on to score 500! Nothing so ambitious crossed my mind. I consider I was lucky to strike my best form on an ideal batsman’s wicket.”

On the second morning Bradman surpassed Andy Sandham’s Test record of 325 achieved against the West Indies at Kingston the previous winter. He was finally taken by Duckworth, Tate claiming his wicket for the fifth and last time. It was obviously a tremendous innings lasting 383 minutes, his 334 off 448 balls studded with 46 boundaries, and containing 6 threes, 26 twos and 80 singles. The next highest was Kippax’s 77.  Bradman was sixth out at 508; Australia folded up for 566.

A delighted admirer, England-based Australian businessman Arthur Whitelaw, presented Bradman a purse of ₤ 1000 for the record innings. It was a princely sum considering that each of the Australian players received ₤ 600 for the entire tour. That Bradman did not share his bounty, or any part of it, with his teammates caused considerable heartburn. The new record-holder, prudent as ever in matters financial, wasted no time in depositing the windfall in his future wife Jessie’s account in the Commonwealth Bank, where she was employed.

“It was an innings that will be remembered not only for its magnitude but for its magnificence,” wrote former England captain Pelham Warner. “It is impossible,” he continued, “to imagine greater batting. It was glorious. To call him a run-getting machine, as he has been called, is a poor compliment that rather implies that the runs are ground out with a roar and a clash and a clatter, while as a fact he makes his runs easily, smoothly and naturally with the mark of genius throughout. He is never flurried or in any apparent hurry, and yet runs come from his bat almost as fast as bullets from a machine gun; there has never been a batsman who in match after match had claimed such a huge proportion of the runs scored.” Ominously and, as it turned out, ironically, Warner concluded, “We must if possible, evolve a new type of bowler and develop fresh ideas on strategy and tactics to curb his almost uncanny skill.”

He may have mesmerised the onlookers, but Bradman himself was not entirely impressed by his own feat. In his autobiography Farewell to Cricket that he wrote after retirement, Bradman reflected: “Whilst admitting that my form was excellent, I have always maintained it was not such a good innings as the previous one at Lord’s. It was made perhaps at a slightly faster rate and included a century before lunch on the first day after Jackson had been dismissed for 1, but there were blemishes in strokeplay of which I was well aware.” Clearly, the perfectionist that he was, Bradman was not satisfied with his record-shattering effort. That is what made him the champion that he was.

A boy of fourteen from Pudsey, Yorkshire, was also at Headingley on that pulsating opening day. His name: Len Hutton. He already hero-worshipped Bradman and as he wrote 58 years later in The Observer, paying tribute to The Don on his 80th birthday, “Bradman made his way to the wicket very slowly on that sunny morning.” Ruminating on the day’s play, Hutton observed: “This was batsmanship of a class never seen before; a ruthless, systematic destruction of an English attack that included Larwood, Tate, Geary, Dick Tyldesley and Hammond. Even when he made an error in that astonishing 334 at Leeds he was quick enough to profit. He charged at one of Tyldesley’s slow leg-breaks, slipped when well out of his crease and just as Duckworth was waiting to collect the ball to effect the stumping, Bradman somehow got his bat to the ball as he fell, cut it down to third man and, instead of being out, got away with a single.” That is called a stroke of genius.

In his book Fifty Years in Cricket, Hutton wrote: “The speed of Bradman’s footwork and the ease with which he found, and even created gaps in the field were a revelation, and an abiding memory. He put the ball exactly where he wanted it to go – and that is no exaggeration. England’s captain Percy Chapman admittedly did not have the fleetest of fielding sides, but no matter how he tried, he could not plug the holes. They appeared everywhere, and no sooner was one filled than another was exposed. For example, if third-man was placed square, Don would steer between slip and gully. If Chapman tried to move third-man finer, Don would thump the move with a fierce square cut, a stroke he played to perfection. And so it went on. Bradman aimed for the maximum result from every stroke, and he saw no advantage in hitting hard and straight to a fielder.” That evening the wide-eyed Hutton rushed back to Pudsey, found two bowlers to practise against and tried to emulate Bradman till the midsummer light faded completely.

The doyen of writers, Neville Cardus, was in the press box, and he wrote later in his book Play Resumed with Cardus: “At Leeds Bradman announced his rights to mastership in a few swift moments. He made 72 runs in his first hour at the wicket, giving to us every bit of cricket excepting the leg-glance. Every fine point of batsmanship was to be admired; strokes powerful and swift and accurate and handsome; variety of craft controlled with singleness of mind and purpose. Bradman was as determined to take no risks, as was to hit boundaries from every ball the least loose. And his technique is so extensive and practised that he can get runs at the rate of 50 an hour, without once needing to venture romantically into the realms of the speculative or the empirical.” In simple terms it meant that Bradman had the ability to turn good balls into bad, and never failed to punish the bad ones.

Lest we forget, there was still a match on. Rain permitted only 45 minutes’ play on the third day, and though England were forced to follow on despite a Hammond hundred, there was never a chance of a result thereon. That was maybe another reason why Bradman was a little bit less than satisfied with this innings. So far in this series he had scored a century, double century and triple century in consecutive Tests. 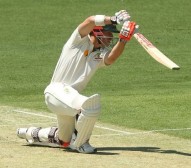 Author Indra Vikram Singh can be contacted on email singh_iv@hotmail.com