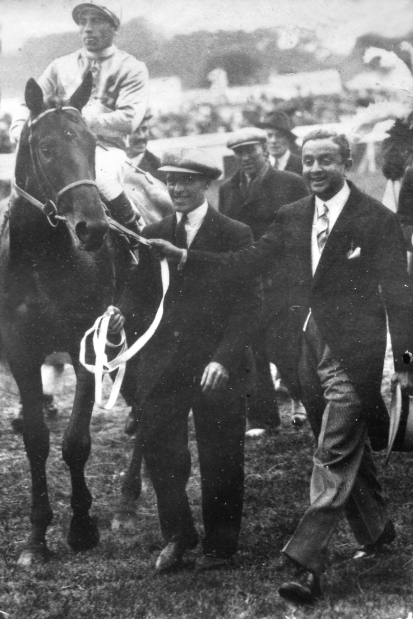 Maharaja Sir Vijaysinhji of Rajpipla leading in Windsor Lad, Charlie Smirke astride, after winning the Epsom Derby 1934, with trainer Marcus Marsh by his side.

Aga Khan III Sir Sultan Muhammed Shah would often be seen at the riverside estate of Maharaja Sir Vijaysinhji of Rajpipla at Old Windsor, England. His son Prince Aly Khan would often land his private aeroplane there on the banks of the Thames, and also in the aerodrome at Rajpipla by the River Karjan.

The friendship probably bloomed on the racecourses of the British Isles and Europe. The Aga Khan, spiritual leader of Ismaili Muslims, and the Maharaja, Gohil Rajput ruler of the 4,000 square kilometre Indian principality of Rajpipla, had a passion for horses and were famous racehorse owners.

The Maharaja won the first-ever Indian Derby, then known as the Country-bred Derby, at Calcutta in 1919. His horse Tipster, ridden by the Australian jockey Bunty Brown, finished first. Having bought his property in Windsor in 1922, Maharaja Vijaysinhji set his eyes on the turf of the British Isles and Europe. His colt Embargo obliged in 1926, bagging the Irish Derby, piloted by the famous rider Steve Donoghue, besides other races. His goal, however, was the blue riband of the turf, the Epsom Derby of England.

The two friends were constantly figuring out ways to win the big race, speaking to the knowledgeable, visiting racecourses, buying thoroughbreds. The Maharaja would invite jockeys and trainers to India during the winter, hosting them at his seaside mansion at Bombay and his State capital Nandod. The Aga Khan made the breakthrough, his horse Blenheim wresting the Epsom Derby in 1930.

Steve Donoghue introduced a young trainer by the name of Marcus Marsh to Maharaja Vijaysinhji. He was the son of Richard Marsh who had trained Epsom Derby-winning horses for the reigning King George V and his father King Edward VII. The Maharaja entrusted Marcus Marsh with the task of buying him horses that had the potential to win classic races. In 1932, Marcus Marsh spotted a yearling in the Newcastle sales, which the Maharaja bought. This colt was named Windsor Lad.

The Aga Khan at the press luncheon before the Epsom Derby 1934.

Having made a promising start to his racing career, Windsor Lad was in the line-up of nineteen horses for the Epsom Derby 1934. The Aga Khan had three horses in the mix, Alishah, Umidwar and Badruddin. The favourite was the unbeaten Colombo. Ridden by Charlie Smirke, Windsor Lad took the lead as the horses came round the left-hand bend at the famous Tattenham Corner into the long final straight. Colombo made a late charge, but Windsor Lad flashed past the winning post, followed by Easton. Beaten for the first time, Colombo finished third. Alishah came in fifth, Umidwar seventh and Badruddin fourteenth.

As a delighted Maharaja Vijaysinhji of Rajpipla led in the triumphant Windsor Lad, and the spectators yelled “Good Old Pip”, the Aga Khan was the first to shout out his congratulations from the sidelines, waving his umbrella. As the Maharaja achieved his own hat-trick of Derbys in three countries, little did anyone know at this delirious moment that a ‘friendly’ hat-trick would be registered at Epsom. The Aga Khan went on to win the Derby in 1935 with Bahram, and in 1936 with Mahmoud.

The Second World War began three years later, and by the time it ended in 1945, much had changed around the globe. Merger of Rajpipla State with the Union of India took place in 1948. The same year, the Aga Khan bagged his fourth Epsom Derby with his horse My Love. Maharaja Vijaysinhji had already started keeping indifferent health, and passed away at his summer home ‘The Manor’ at Old Windsor in 1951. As it happened the following year of 1952, for his horse Tulyar, the Aga Khan commissioned Marcus Marsh and Charlie Smirke, the same trainer and jockey respectively who won the Maharaja the Epsom Derby in 1934. Tulyar completed the Aga Khan’s splendid tally of five Epsom Derby victories.

Aga Khan Sultan Muhammed Shah died in 1957. Featured in Marcus Marsh’s book ‘Racing with the Gods’ about famous racehorse owners for whom he trained were Maharaja Sir Vijaysinhji of Rajpipla and Aga Khan III Sir Sultan Muhammed Shah. This was really the epilogue to the story of two aristocratic friends from Asia who left an indelible mark on the world of racing.

The Aga Khan was succeeded by his grandson Prince Karim, who has himself become a celebrated racehorse owner. In 2016, Prince Karim Aga Khan IV emulated his grandfather by winning his fifth Epsom Derby. His words “Winning the Derby is a goal for any owner. It has been for centuries. This is a great race with a great history,” may well have reflected the thoughts of his predecessor and the debonair Maharaja. Indeed, the more things change, the more they remain the same.

(The story of the Epsom Derby 1934 is recounted in the book ‘A Maharaja’s Turf’ by Indra Vikram Singh, grandson of Maharaja Sir Vijaysinhji of Rajpipla).