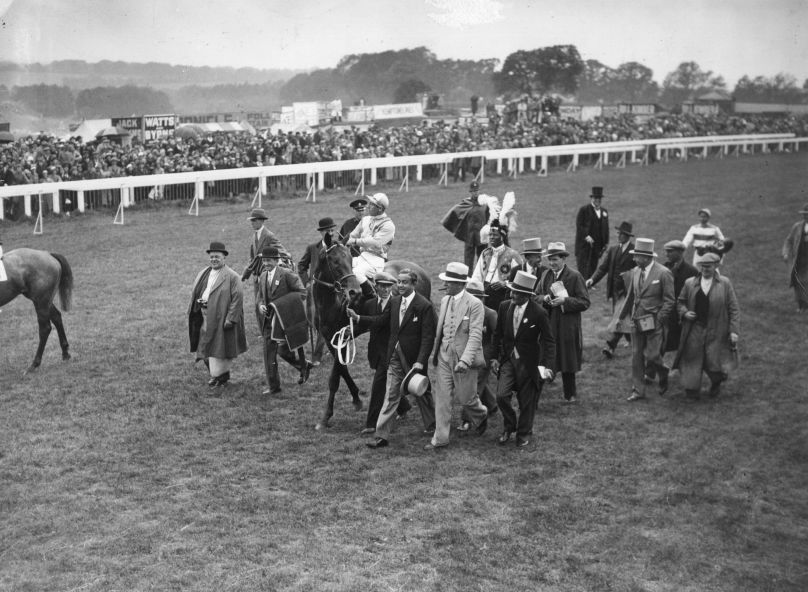 WINDSOR LAD, ridden by Charles Smirke, and trained by Marcus Marsh, won the Derby yesterday for the Maharaja of Rajpipla. Second, beaten by a length, was Lord Woolavington’s Easton, ridden by Gordon Richards, and third was the hot favourite, Colombo, in Lord Glanely’s colours. He was beaten by a neck from the second horse.

The winner covered the mile and a half in 2 min 34 sec, which equals the record set up by Hyperion a year ago.

Colombo appeared in the paddock already saddled. He has been prepared for the race in the quietude of the Durdans Plantation. When he came into public view he was cool and contented. There was no sign of any temperamental outbreak. He proceeded to the parade ring, and from that moment there was never any question about his nerves failing him. He looked strong and in perfect trim for the race.

Really the only horses that interested the critics and the public generally were Colombo, Windsor Lad, Easton, Umidwar and Tiberius. Four of them were in the first four positions. Only Umidwar ran below expectations, to be placed seventh.

There was little delay at the start. When the barrier was raised, the favourite was well away, though he had been drawn on the low ground, which is not considered the most favourable. Actually the first to show in front was Steve Donoghue’s mount, Medieval Knight. One then noted Tiberius taking third place. Umidwar, Valerius and Admiral Drake were among the slow beginners.

After they had covered about half a mile Medieval Knight was still in front, with the favourite behind him, and now next the rails. It is not inconceivable that the story of the race might have had to be written differently had Colombo not been tucked up so close to the rails, with Bondsman, Windsor Lad, Fleetfoot, Primero and Badruddin all racing on the outside.

This was the start of the pocket in which Colombo was found halfway during the long and critical descent of Tattenham Corner. They came to the upper ground, just before making the big turn, at which point the friends of the favourite could not have failed to be well satisfied. Then occurred a dramatic change.

Colombo did not keep his place. Tiberius had gone to the front and was being followed into the straight by Windsor Lad. When, soon afterwards, Windsor Lad took the lead from Tiberius the race was won for the Maharaja’s colt. He was never headed again. Such changes as occurred afterwards affected others. Tiberius began to weaken just when he should have been served by his presumed stamina.

Easton, who had been just behind Colombo nearing the end of his descent, but on his outside, and, therefore, with a clear run, began to make considerable headway up the straight. Windsor Lad and Easton appeared to have the issue between them until Colombo again came into view.

This time, however, he was seen wide out in the middle of the course. It was astonishing to find him there. Yet there he was, and though there was a clear road ahead it was obvious that he would have to be something more than the unbeaten horse of the period to overcome the seriousness of the position he was now in.

I could gave him no chance. The other two were too far in front with little more ground to cover. Yet for a few seconds there did seem the possibility that the favourite would come storming on the scene to maintain his status as a champion. He closed the gap up to a point. But the effort could not be maintained. He had had to cover more ground, probably by several lengths, than any other horse from the time the turn to the straight had been reached.

Even if Colombo had not done so he might never have beaten the winner, but one is left in some doubt. He was running on at the finish, which makes me think he was not beaten because he could not stay the mile and a half. The luck was not with him and his jockey. He was pocketed at a most vital stage of the race while others were getting a free and open first run on him.

Fourth was Tiberius and fifth the Aga Khan’s Alishah, though his jockey, Perryman, reported that at the top of the “Corner” he lost both his irons. Why this should have happened I do not know. At the time he was well behind the leading bunch. In the circumstances Alishah can be expected to do well on a future occasion.

Admiral Drake, the French candidate, broke down, which explains his failure. We must accept the result as it stands and admit that for the moment Colombo has failed to live up to the expectations entertained of him. I am far from satisfied about him. It is not possible to go much further than that, except to say that one is left with the feeling that if things had gone more his way he might have maintained his unbeaten reputation and be the Derby winner to-day.

The right thing in the circumstances is to give a great measure of credit to Windsor Lad and to say that he won without leaving the slightest doubt as to his stamina, his speed and his courage. It was a grand thing for all concerned. The Maharaja of Rajpipla was naturally immensely elated. He is greatly liked by all his English friends, and this magnificent victory has come to him after about a dozen years of ownership on our Turf.

I recall a victory on Epsom’s racecourse some years ago when Embargo won for him the City and Suburban. He was no more than a handicapper. Windsor Lad was bought by him as a yearling because he was a son of Blandford, whose stock were winning the big races. Blandford, indeed, has now sired three Derby winners – Trigo, Blenheim and Windsor Lad. It is a great performance for that sire, now, by the way, at the Whatcombe stud in England.

The Maharaja was speedily on the course, waiting to lead in his horse. One of the first to congratulate him was the Aga Khan. Many others cordially extended their felicitations. Very soon after the jockey had weighed in the Maharaja was invited to proceed to the Royal box and there receive the congratulations of the King and Queen. He was truly delighted with the warmth of the reception on every hand, and will certainly never forget this wonderful day in his life.

We must not forget the big parts played by the trainer and jockey. If only the late Richard Marsh could have been spared to witness the success of a Derby winner trained by his son! The King’s trainer himself trained the Derby winners Jeddah, Persimmon, Diamond Jubilee and Minoru. Now his son, who is a young man and most able for his years, has achieved this fine thing for the Indian ruler. The jockey, Charles Smirke, was unable to ride for five years because of the displeasure of the Jockey Club, but he came back last autumn and his great chance came to ride this fancied horse in the Derby. He showed coolness, fine judgment and skill, and is now re-established in the best sense.

WILL RIVALS MEET AGAIN AT ASCOT?

There was talk yesterday of the Derby winner, Windsor Lad, next running for the Grand Pix de Paris, to be decided at Longchamps on Sunday, June 24.

It is just as well, therefore, to let it be known that the colt is not in the race. The Maharaja of Rajpipla’s only entry is Washington.

Colombo is in the race, but it is doubtful whether Lord Glanely will sanction his being sent over. A horse could not run both at Ascot and in Paris. The interval is much too short, and it happens that Colombo, as well as Windsor Lad, is engaged in the St. James’s Palace Stakes on the first day of Ascot.

It is a mile race of very considerable value. Here Windsor Lad and Colombo might meet again at level weights. The possibility is there, but the probability is not so assuring.

The rivals are also in the King Edward VII Stakes of a mile and a half on the second day of the meeting. If the usual happens then a meeting will be avoided, since the main thing in the mind of an owner is to win one of the main prizes at Ascot with the minimum of risk of defeat. I may add that both Colombo and Windsor Lad are engaged in the St. Leger of a mile and three-quarters.

Both colts are no worse for their race on Wednesday. The Maharaja of Rajpipla is entitled to be satisfied on the result that he has the best colt in the country. There is less conviction that Colombo was beaten on his merits. Meanwhile the owner of the winner can look forward to receiving some important cheques from bookmakers on Monday which splendidly garnish the stake and the honours of the race itself.

A long time ago, the Maharaja made a bet, before he left India, of £4,000 to £400 and £1,000 to £100 a place. There were other wagers since at shorter prices. The total amount has doubtlessly been well liquidated by what a generous and delighted owner has already disbursed in presents, especially, of course, to those who were chiefly instrumental in bringing about the victory.

ANOTHER Derby has passed into history, and has furnished one more instance of the uncertainties of racing. Colombo, the wonder horse who maintained his position in the betting to the end, made a brave challenge in the last two hundred yards, but was unable to overcome the disadvantage of being badly place at the corner, and ended third. The victory of Windsor Lad was a triumph for a young Indian Prince and for the youngest trainer with a horse in the race, as well as for the jockey. Since all the placed horses were among the favourites of the public the running was more true to form than it has been in many a past Derby.

In all respects it was a great Derby Day. The time of the race equalled the record of last year. The KING was present to congratulate the victorious owner. Nor had the slight break in the long drought or the absence of sun in any way diminished the attendance on the course. For the superstitious there is the fact that Windsor Lad was thirteenth in the draw, to say nothing of that prophesy of Gipsy LEE about horses with a “W” in their names which, if it ever was made, has proved true. For those who hold that only the bottomless purse can purchase the winners of great races there is the disconcerting fact that Windsor Lad was bought for £1,300 as a yearling.

(Read the story of this memorable race in ‘A Maharaja’s Turf’ by Indra Vikram Singh, grandson of Maharaja Sir Vijaysinhji of Rajpipla).