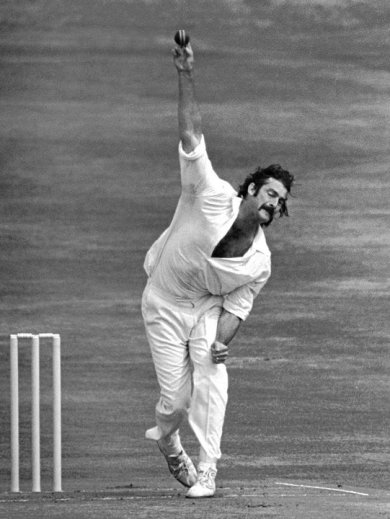 Dennis Lillee is inarguably one of the best fast bowlers in the history of cricket. He was among the first in a distinguished line of modern speedsters who began emerging in the early seventies. By the middle of the decade, Lillee had already made a mark as one of the greats of the game. The quintessential paceman, his run-up was poetry in motion, the high action a model for youngsters, his pace scorching, the late movement in the air and off the wicket mesmerising, and aggression that would rattle even the bravest and most focussed of batsmen. Remember, the one occasion when the great accumulator of runs and scourge of bowlers, Sunil Gavaskar, lost his composure on the field was while facing Lillee. No, you could not find a fast bowler in purer form than Dennis Lillee.

That is so when you take a holistic view of the game. One-day cricket is different. In this version the bowler is throttled, particularly the fast bowler. Pressed by the need to bowl a controlled line and length, the truly skillful bowler is forced to sacrifice speed, swing and cut, spin and flight, and to concentrate on preventing ordinary batsmen from scoring too quickly. It is seldom that a bowler of pedigree is allowed to give full vent to his abilities in the One-day game.

7 June was the first day in the World Cup. Australia and Pakistan were two of the stronger teams then. The Aussies put up a challenging score of 278 for seven in the allotted 60 overs, with Ross Edwards scoring a fine unbeaten 80.

The terrifying duo of Lillee and Jeff Thomson opened the bowling. In his first over Thomson had the mortification of delivering four no balls and a wide. In all he bowled 12 no-balls, besides the wide, in his 8 overs. Fred Trueman commented: “I was thrilled by Jeff’s pace but not by his lack of control as he tried to prove he is the fastest bowler in the world.”  But the terrible twins delivered a double blow before long. Lillee sent Sadiq Mohammad’s stumps cartwheeling in his second over. Then Thomson put Zaheer Abbas out of his misery by having him caught.

Majid Khan played a nonchalant knock and then skipper Asif Iqbal and Wasim Raja added 77 runs for the fifth wicket with a great degree of ease. At 181 for four, Pakistan were cruising. That was when Lillee returned to the attack and struck a stunning blow. He knocked back Asif Iqbal’s stumps. As Max Walker removed Wasim Raja and Imran Khan, Lillee scythed through the tail in a flash, twice in combination with his legendary partner behind the stumps, Rodney Marsh.

Pakistan were dumbstruck. They lost their last six wickets for a mere 24 runs to be all out for 205 with seven overs still remaining. From a position of strength, they crashed to a crushing defeat. The man responsible for this ignominy was Dennis Lillee. As so often in his career he first prised open the door, and once in, demolished the opposition with a vengeance till the last man went down. Lillee finished with five for 34 off his 12 overs.

It was the first five-wicket haul in the competition and when you consider that this feat has been achieved only 38 times in 303 World Cup matches, you realise the full import of Lillee’s performance. On this day Dennis was a living menace for the hapless Pakistanis. His captain Ian Chappell once commented: “I’d say, ‘we’re down a bit, give us something special.’ I was lucky because I had a bloke called Lillee in my side.”