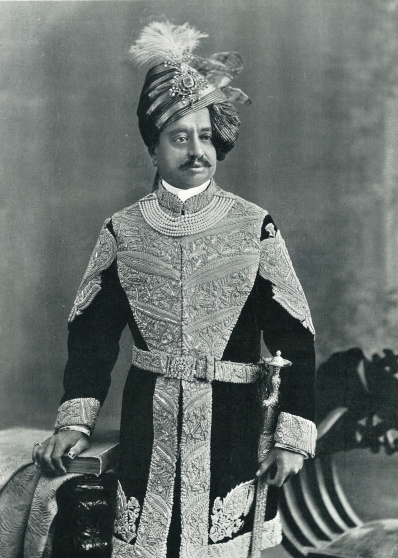 His Highness Maharana Shri Sir Chhatrasinhji (1862-1915), was the 35th Gohil Rajput ruler of the kingdom of Rajpipla in western India. He was born at Juni Haveli (Old Palace), Nandod, the capital of Rajpipla State on 18th December 1862. Educated at Rajkumar College, Rajkot, he trained as a magistrate and revenue officer before his accession. Chhatrasinhji succeeded to the gadi of Rajpipla on the death of his father Maharana Gambhirsinhji, 10th January 1897, and installed on the gadi at the Fort, Junaraj (Old Rajpipla), 20th May 1897, with full ruling powers. Like his father, he was entitled to a salute of 11-guns, and held a sanad authorising adoption.

Maharana Chhatrasinhji immediately set about instituting a programme of reform and development. Not only was he instrumental in saving thousands of lives during the epic famines of 1899-1902 by granting huge amounts of relief amounting to Rupees 9,00,000, he was a fine administrator and pioneer in more ways than one. He built the 60-kilometre Ankleshwar-Rajpipla railway line, which he initiated in the very first year of his reign, connecting his State with the Delhi-Bombay main line.

Maharana Chhatrasinhji driving his Wolseley car in Rajpipla, with Governor of Bombay Lord Lamington seated beside.

The dawn of the era of motoring coincided with Maharana Chhatrasinhji’s reign, and being progressive in outlook, was among the first to import automobiles into India. He thus brought a Wolseley 6hp of 1903-04, which he drove with great delight. The Maharana also owned a Clement-Bayard 16 hp car. Automotor Journal of 10th February 1906 reported that this car took part in the Bombay-Mahabaleshwar Trials and did not lose a single point in Class B, that is, cars costing between £253 and £450.

A paper dated 10th April 1912 from the Dewan of Rajpipla, bears a typed reference to Mr. K. Messia who was in the service of Maharana Chhatrasinhji as motor engineer and chauffeur for six months. He had five cars under his charge and thoroughly overhauled and repaired a Clement Bayard car in a satisfactory manner. There is still a house in the Chhatra Vilas Palace compound in Rajpipla known as the English driver’s cottage.

One of the ruling Indian princes who attended the coronation of King George V in London in 1910, he also attended the Durbar at Delhi in 1911. In that year the revenue of the State was Rupees 10,50,000 (₤ 105,000). After a successful rule of 18 years, Maharana Chhatrasinhji passed away on 26th September 1915 at Poona. He was succeeded by his son Maharana Vijaysinhji.

6 thoughts on “Death Centenary of Maharana Chhatrasinhji of Rajpipla”