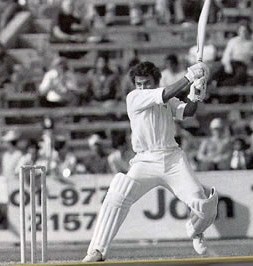 Sunil Gavaskar’s arrival was indicative of the fact that Indian cricket had come of age. The spin quartet of Erapalli Prasanna, Bhagwat Chandrasekhar, Srinivas Venkataraghavan and Bishen Singh Bedi were at the height of their powers. Gavaskar showed that fast bowling could not only be tackled but also scored off, in a prolific if not dominant fashion. Before him, Indian batsmen, with some notable exceptions, had the dubious reputation of stepping away to leg when confronted with genuine pace, and floundering against swing. Gavaskar changed it all.

There was a new captain at the helm, Ajit Wadekar, on that path-breaking tour of the Caribbean in 1971, ending at least for the time being the Pataudi era which had also begun in the West Indies nine years earlier. The signs were ominous as India won the second Test at Port of Spain by 7 wickets. It was India’s first victory over the West Indies in six series, home and away, and helped clinch the rubber, with the other four Tests drawn. Gavaskar scored 65 and 67 not out on debut, and gave solid starts in both innings along with Bombay (now Mumbai) colleague Ashok Mankad.

Two other Bombay stars made it a habit of pulling India out of troubled waters. In the first Test at Kingston, with India tottering at 75 for five, Dilip Sardesai (212) and Eknath Solkar (61) put on 137 runs to help raise a respectable total of 387. With no play on the first day, the follow-on could be enforced in the four-day Test with a lead of 150 runs, and Wadekar in his maiden Test as captain inflicted this ignominy on the hosts. The ageing Rohan Kanhai and skipper Garfield Sobers brought back memories of their halcyon days in a match-saving fourth-wicket partnership of 173 runs. Kanhai scored 56 and 158 not out, and Sobers 44 and 93. It seemed that the experienced middle-order would have to see the West Indies through, for the bowling was depleted, with Sobers having to bowl long stints.

It was not to be. Sobers and Kanhai did not fire in the second Test, and Clive Lloyd was a disappointment through the series. India won the Test with ease, heralding one of the happiest phases in their history, and marking the beginning of the end of Sobers’ days as leader. The brilliant side that he had inherited from Worrell, and which flowered under him in the mid-sixties, had all but disintegrated. In that triumph at Port of Spain, after Gavaskar’s promising debut, once again Sardesai (112) and Solkar (55) added 114 for the fifth wicket to give India a handsome first innings lead. Then as Wadekar, in a master-stroke, brought on the tall left-arm spinner Salim Durrani who castled Lloyd (15) and Sobers (0), India were on the road to victory. Gavaskar ultimately brought up the win in the company of Abid Ali.

That was the point when Indian cricket earned its self-respect, and emerged from the shadows onto the world stage. The man to show the way was the little opener. Rarely has one man done so much to change the fortunes of a nation’s sport. Inevitably, Gavaskar’s maiden Test century came in the next innings. He scored 116, once again laying a solid foundation to the Indian innings along with Mankad, and helping India take the first innings lead. It took an unbroken 170-run fourth-wicket stand between Charlie Davis and Sobers, unbeaten with 125 and 108 respectively, to save the day for the West Indies. Sobers’ declaration provided the opportunity to Gavaskar to score his third sixty. This time he clocked up an unbroken century stand with Mankad, worth 123 when stumps were finally drawn.

The only innings in which Gavaskar failed in the series was at Bridgetown when he was caught at mid-wicket off debutant paceman Uton Dowe for 1. Yet again Sardesai (150) and Solkar (65) retrieved the situation, this time from an even more abysmal 70 for six, faced with a huge West Indies score of 501 for five declared. Sobers had scored a monumental unbeaten 178 and put on 167 for the fourth wicket with Davis. On this occasion Sardesai and Solkar were associated in a 186-run partnership. The tailenders held on with Sardesai to save the follow-on. Sobers set India a target of 335 to win in a little over five hours. The run chase was never on and Gavaskar, in his own words, played “purely a defensive innings” of 117 not out, though he did fire a few rousing shots including a hooked six off Dowe. The Test was saved.

On the eve of the six-day final Test, again at Trinidad, Gavaskar developed severe toothache and spent a sleepless night. He had to wait for his troublesome tooth to be extracted till the Test was over and was denied pain-killers even at night on the plea that they would make him drowsy during play. Mankad had fractured his right wrist fending off a Dowe snorter in the second innings at Bridgetown, and his replacement Kenia Jayantilal broke his thumb in the intervening match at Dominica. As a result Abid Ali accompanied Gavaskar at the top of the order. Sobers, under pressure to square the series, opened the bowling, sending down a torrid spell. Abid Ali fell for 10 and Wadekar for 28. Gavaskar and Sardesai then put on 122, the little opener batting through the pain to score 124.

Sobers was indeed a determined man. He hit up 132, putting on 183 for the fifth wicket with Davis (105). West Indies piled up 526, a lead of 166. The pressure was on India. Gavaskar was now weak and worn out, still in pain, unable to eat or sleep properly, and having fielded for long hours in hot and humid conditions. Sobers was again sharp with the new ball, trapping Abid Ali early. Wadekar, though, helped Gavaskar add 148 runs.

The battle lines were drawn on the fifth day as Gavaskar soldiered on. He completed his second century of the Test to a huge ovation, with some of the spectators invading the pitch. He began the final day on 180, in very poor physical condition. And when he cover-drove Dowe to bring up his double hundred, all hell broke loose. The delirious crowd hoisted him high and literally played around with the little fellow. It was only the second time in Test history, after Doug Walters’ 242 and 103 against the West Indies in 1968-69, that a hundred and double hundred had been scored in the same game. Gavaskar had progressed to 220 when he finally chopped a ball on to his stumps. The next highest was Wadekar’s 54. Now at last Gavaskar could get his tooth extracted. It was a painstaking effort, literally, that ensured a landmark series triumph for the country.

The West Indies needed 262 to win with time running out. In the end their ninth-wicket pair hung on precariously to eke out a draw. Such was Gavaskar’s memorable, and phenomenal, initiation in Test cricket. No one had scored so many runs, 774, on first appearance. That was in just four Tests, and his average of 154.80 would have made Bradman proud. The entire cricketing world was now talking about this 21-year-old. Over the next sixteen years Gavaskar earned the admiration and respect of players, critics and fans alike, and came to be rated as one of the greatest opening batsmen ever.

It might not have been a top-class West Indies bowling attack and Sobers may have dropped him on a couple of occasions, but Gavaskar displayed a wonderful technique, a wide range of strokes, patience, determination, resilience and a tremendous will to battle on in the face of acute physical discomfort. Surely, this little young man was out of the ordinary.