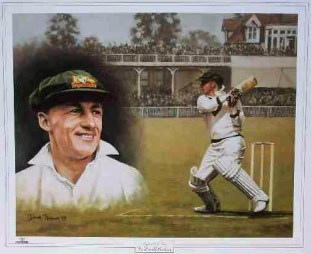 England had little to play for in the final Test at Sydney. Hutton scored a hundred on the first day before retiring hurt for 122. The second day’s play was washed out. England totalled 280 as Lindwall captured seven for 63. For Australia, Barnes and Morris put up a century opening stand, while Bradman was dismissed for 12. Doug Wright claimed seven for 105, as England took a first innings lead of 27.

In the absence of Hutton they were bowled out for 186, with Compton playing a valiant innings of 76. McCool now took five for 44, Australia being left with 214 to win. Bradman took them to within sight of victory, thanks to a 98-run stand with Hassett (47). The Don left after scoring 63 off 117 deliveries in as many minutes, with 7 hits to the fence. This brought Miller to the crease, who ushered the team to the inevitable triumph by five wickets with his belligerent 34 not out containing 6 fours.

It was an emphatic 3-0 series win for Australia, who were now growing in strength under Bradman with the emergence of a new generation of batsmen and pace bowlers. It was a tremendous allround side and a fielding outfit par excellence with a brilliant Don Tallon behind the stumps. Bradman’s experience and shrewd captaincy turned a collection of strong individuals into an unbeatable combination. Miller had once said: “I didn’t get along with him as a man. We had nothing in common. But, as a batsman, captain and tactician, he had no equal.”

For England, Hutton, Compton and Edrich topped 400 runs each, but Hammond was a shadow of his former self, failing to register even a half-century. Doug Wright took 23 wickets, albeit at 43.04 apiece, and even the great Alec Bedser’s 16 wickets cost 54.75 each. Clearly, Bradman’s side had outclassed them.

Once again Bradman topped 1000 runs in a first-class season. In 9 matches he scored 1032 runs at an average of 79.38 with 4 hundreds. He was playing alongside virtually a new generation of players and not only was he matching their youthful energy, but still outclassing them. The war had not taken away any of his skills. Imagine what kind of record he would have built up had the Second World War not happened.