Bradman begins the most amazing turnaround in Test history in a huge stand with Jack Fingleton in the 1936-37 Ashes series : Excerpt from Indra Vikram Singh’s book ‘Don’s Century’ 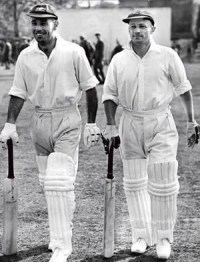 They were met by unsettled weather at Melbourne, and managed only 181 for six on the first day. McCabe displayed his class again, returning unbeaten with 63 at close of play. Bradman was dismissed for 13. Voce sent back McCabe immediately on resumption, and Bradman declared at 200 for nine. England’s innings never got off the ground, and they were tottering at 76 for nine, Seivers bagging five for 21, when Allen too closed the innings. He met with immediate success, O’Reilly sent in to open in the treacherous conditions, was caught and bowled by Voce, amazingly another dismissal off the first ball of the innings. Australia were 3 for one wicket in a reversed batting order when play ended that evening.

Chuck Fleetwood-Smith was also removed for nought by Voce first thing in the morning. Wickets kept falling regularly. Opener Fingleton came in at no. 6, Bradman at no. 7. By then the score was 97 for five. McCabe had still not put in an appearance. Bradman had a providential escape when Walter Robins dropped him in the covers. It drew a sarcastic jibe from the captain Allen, “Well done Walter, you’ve cost us a Test series.” That only reflected the awe in which the English held Bradman. Allen knew that this was just the bit of fortune The Don needed to turn the series around. He was, of course, dead right. By stumps Bradman was unbeaten on 56, and Australia were 194 for five. By then he had crossed 4000 runs in Test cricket.

And then the Bradman juggernaut began to roll again. He batted through the fourth day, at the end of which he was 248 not out and his side at 500 for six. His sixth-wicket stand with Fingleton (136) was worth 346, a record that stood till 2009. Never more could Fingleton’s words, “To bat with him was an exercise in embarrassing futility,” have been more apt. Bradman went on to score 270, having faced 375 balls in a little over seven-and-a-half hours, and struck 22 fours. Years later the bat with which he played this magnificent innings was auctioned for $ 45,000. Australia finished on 564, and the visitors were set a ridiculous 689 to win. Leyland was again in exquisite form, scoring an unbeaten 111, and on the sixth day Australia won by 365 runs. The series was still alive but the pressure was still on Australia.