When Bradman was stranded on 299 in the Adelaide Test of 1931-32 : Excerpt from Indra Vikram Singh’s book ‘Don’s Century’ 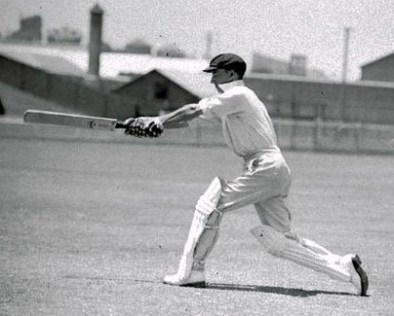 The South Africans did take some confidence into the next Test at Adelaide. Bill O’Reilly was now back in tandem with Grimmett, but the visitors batted well right through the order, led by Bruce Mitchell and Herbie Taylor. Grimmett bagged seven for 116 as South Africa totalled 308. Woodfull was again Bradman’s ally after Ponsford fell with only 9 runs on the board. This time they put on 176. Then it was Bradman all the way. He cantered to his hundred. Kippax and McCabe failed but Rigg hung around while Bradman blazed away. Rigg contributed 35 to a partnership of 114. The Don reached his double century, and was aided by Oldfield, Grimmett and O’Reilly. When the last man, debutant Pud Thurlow joined him, Bradman was closing in on his triple ton. This time he was to be denied. While Bradman was scampering for his 300th run, Thurlow was run out. Australia were all out for 513. Bradman had batted almost through the innings for his unbeaten 299 in six hours and thirty-six minutes, having hit 23 fours.

Yet again Bradman had taken the game away from the bewildered South Africans. He had simply pulverized them through the series. “Every ball is for me the first ball, whether my score is 0 or 200, and I never visualise the possibility of someone getting me out,” was how The Don once described his mindset. Even though Mitchell and Taylor fought valiantly again, it was Grimmett who stole the show with another seven-wicket haul. His match figures were fourteen for 199, the first time since the First World War that a bowler had captured so many wickets in a Test. Only 70 runs were required for a win, which Woodfull and Ponsford hit off without much difficulty.

With rain intervening, and the South Africans a demoralised lot, the final Test at Melbourne produced the lowest-ever aggregate for a completed Test match. South Africa were shot out for 36 and 45, and Grimmett was not required to bowl in either innings. In between Australia were dismissed for 153, with Bradman unable to bat through injury. Ironmonger this time picked up eleven wickets for 24 runs.

Bradman had hit hundreds – two centuries and two double-centuries – in each of the four Tests that he batted. Geoffrey Tebbutt said of his style: “Do not assume that young Don is a batsman without delicacy of touch. I have seen him score many hundreds, in his many thousands of runs, by strokes of a delicacy which a billiardist might envy.” He aggregated 806 runs at an average of 201.50, best-ever in a five-Test series. The next best on either side was Woodfull with 421 runs at 70.16 per innings and one hundred, and he batted in all five Tests. The only other centurions were Rigg and Viljoen, who also got one each. That was the extent of Bradman’s dominance. At the time this was the third-highest aggregate in a Test series after his own 974 in 1930 and Hammond’s 905 in 1928-29. Grimmett and Ironmonger took 64 wickets between them.

In ten first-class matches of this season, Bradman scored 1403 runs at an average of 116.91 with 7 three-figure knocks. His Test record at this juncture, before the Bodyline series, stood at 19 matches, 2695 runs at an average of 112.29, 6 hundreds, 5 double hundreds and a triple hundred. Complementing these mesmerising statistics were the record knocks in first-class as well as Test cricket. Such was the phenomenon of Bradman. The cricket world was aghast, and it was now up to the English, who were touring the next season, to devise a strategy to contain him.