A Talent For War 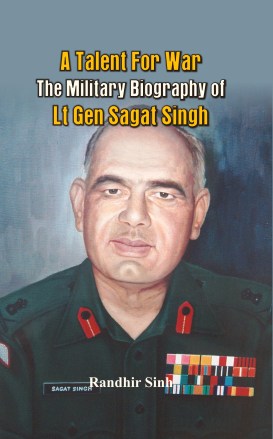 ‘A Talent For War’ is the military biography of Lt. Gen. Sagat Singh, considered one of the military geniuses of independent India.

This distinguished officer of the 3rd Gorkha Rifles played a heroic role in the 1971 war with Pakistan that led to the liberation of Bangladesh. In a major logistic achievement he moved the 4 Corps that he was commanding, to Agartala. When operations commenced, his Corps relentlessly attacked the Pakistani forces, crossing river lines and terrains considered impassable. His innovative use of helicopters was a brilliant strategy that has never been replicated. His Corps inflicted a crushing defeat on the Pakistanis, the only example of a corps level campaign, which shall certainly stand the test of history.

The book was released by the Chief of Army Staff General Bikram Singh at a well-attended function in New Delhi.

The author of the book Maj. Gen. Randhir Sinh (retd.) is a much-decorated officer himself from the 3rd Gorkha Rifles, having served under, and closely observed the brilliance of, Lt. Gen. Sagat Singh. Maj. Gen. Randhir Sinh was posted mainly in counter-insurgency areas and high altitude terrain along the Indo-Chinese border. He commanded the Brigade in Siachen and served as a division commander on the Line of Control. Maj. Gen. Randhir Sinh has been awarded the Chatrapati Shivaji Chair of Excellence by the United Services Institution of India.

Lt. Gen. Sagat Singh was born on 14th July 1919. Hailing from the Rathore Rajput clan, he commenced his military career in the Bikaner State Forces. During World War II he was commissioned as an officer and served in the Middle East. By the time the War was over, he was already the only officer to have completed two staff courses, including the prestigious course at Quetta. After Independence he was absorbed into 3rd Gorkha Rifles of the Indian Army. He was given command of the Para Brigade, which he led in the Goa Operations with verve and dynamism. There is no doubt that he was primarily responsible for liberating this Portuguese colony, which was then integrated into India.

On promotion as Major General, the dashing Sagat Singh commanded 17 Mountain Division in Sikkim. In a fierce battle with the Chinese in 1967, he showed the enemy that the Indian Army is no pushover. The same year he was transferred to Shillong, and entrusted with the task of curbing the Mizo insurgency. He carried out the mission successfully in a matter of just two years.

He was elevated to Lieutenant General in 1970, and it seemed as though his whole life was geared to leading a Corps into battle. His knowledge of the operational art was perhaps without parallel.

Profusely illustrated with photographs and maps, and extensively researched in the archives, and by way of interviews, this is a stirring tale of a war hero, of struggles, triumph and tragedy, of inspiration, resilience and valour. Sagat Singh is indeed a role model for the soldier in all of us.

(The publishers Vij Books India Pvt. Ltd. can be contacted on email vijbooks@rediffmail.com).