Excerpts from ‘A Maharaja’s Turf’ ….. 15 – Epsom Derby 1934 : The Illustrated London News on the four critical moments in the race

THE 1934 DERBY: FOUR CRITICAL MOMENTS IN THE RACE

The Derby was won on Wednesday, June 6, by Windsor Lad, owned by His Highness The Maharaja of Rajpipla, trained by M. Marsh, and ridden by C. Smirke. Lord Woolavington’s Easton (Gordon Richards up) was second, a length behind; and Lord Glanely’s Colombo (W. Johnstone up) was third, a neck behind Easton. The time was 2 minutes 34 seconds, equalling the record set up last year by Hyperion. Betting was 15-2; 100-9; and 11-8. Thus, once more, the favourite went down – in fact, more than an ordinary favourite, for Colombo had been tipped and re-tipped until the majority had come to regard him as unbeatable. Windsor Lad (Blandford-Resplendent) cost his owner thirteen hundred guineas, and before the Derby he had won three thousand pounds in stakes. This year he won the Chester Vase. He also ran in the Newmarket Stakes, when he beat Flamenco. Although there was some rain at Epsom, the going was distinctly hard. The King and Queen, the Prince of Wales, the Duke and Duchess of York, the Duke of Gloucester, Prince George, and the Princess Royal were present. 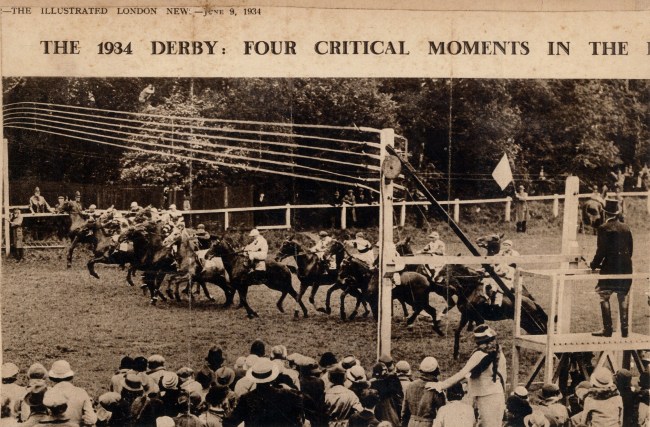 1.  THE START: THE HORSES GET AWAY WELL TOGETHER, WITH MEDIEVAL KNIGHT, STEVE DONOGHUE’S MOUNT, IN THE CENTRE – THE STARTER SEEN ON THE RIGHT.

2.  ON THE MILE POST: STEVE DONOGHUE LEADING ON MEDIEVAL KNIGHT (WHICH FELL BACK AT TATTENHAM CORNER); WITH GORDON RICHARDS ON EASTON BEHIND HIM. 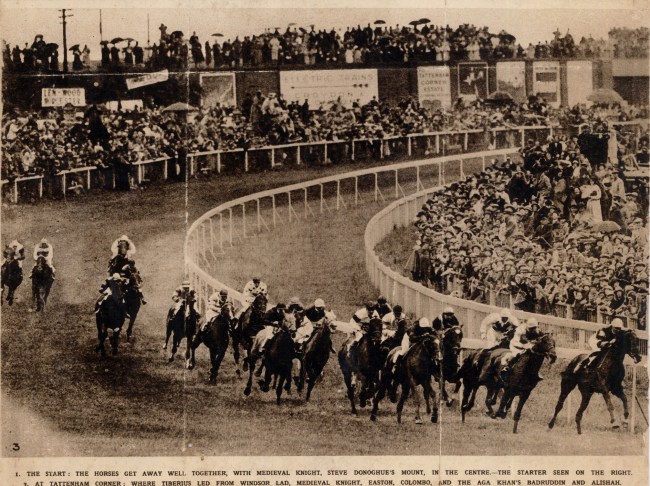 3.  AT TATTENHAM CORNER: WHERE TIBERIUS LED FROM WINDSOR LAD, MEDIEVAL KNIGHT, EASTON, COLOMBO, AND THE AGA KHAN’S BADRUDDIN AND ALISHAH.

4.  THE FINISH: WINDSOR LAD WINNING BY A LENGTH FROM EASTON, IN 2 MIN. 34 SEC.; WITH THE “UNBEATABLE” COLOMBO THIRD, A NECK BEHIND EASTON.

(Author indra Vikram Singh can be contacted on email singh_iv@hotmail.com).