Excerpts from Indra Vikram Singh’s book ‘A Maharaja’s Turf’ ….. 3 – Interview with Maharaja Sir Vijaysinhji of Rajpipla published in Guide for Competitors, UK, on 5th June 1934, a day before the Derby

FROM THE OWNER OF WINDSOR LAD

MAHARAJA’S TIP FOR THE DERBY

By THE MAHARAJA OF RAJPIPLA

(in an interview with “Gimcrack”, the well-known sporting journalist)

Every few years a Derby comes along which is dominated by one horse. Two years ago it was Orwell, six years ago it was Fairway, fifteen years ago it was The Panther. Now we have Colombo. The fate which has befallen post-war Derby “hot-pots” is causing many people now to look for something better than Colombo, although Lord Glanely’s grand colt has never been beaten.

Let us think for a moment what is needed to win the Derby. The exact distance of the race is a mile and a half and about 39 yards. The winner covers the distance in anything from 2 min. 34 sec., as did Hyperion when record-breaking last year, to 2 min. 47 sec., as did that grand colt Coronach when winning in heavy mud eight years ago.

In other words, a horse must travel at a rate of 34 miles an hour, or rather more, up hill, down dale, turning once sharp right after the start, and then sharp left at Tattenham Corner, and generally proving himself a versatile creature of high speed.

There is no stretch of race track in the world which demands so much of a horse as this switch-back and tortuous mile and a half over some of the best downland in Great Britain.

A horse must be a true stayer to win the Derby. The race is won too fast from the start to permit any dawdling from a horse whose rider seeks to conserve his strength for a late spurt.

It is therefore desirable, if possible, to find a colt which has won over the Derby distance, or has otherwise proved in public, his ability to stay. Colombo does not come within this category, and the mile of the Two Thousand Guineas and the Craven Stakes is the farthest he has ever travelled in a public race, though I believe he has galloped over a mile and a half on the trial ground.

Horses which come within the category I have mentioned include my own colt, Windsor Lad, who won the Chester Vase and the Newmarket Stakes; Tiberius, undoubtedly a good stayer;  Medieval Knight, who just beat Tiberius at Lingfield; and Alishah, who won over the mile and a half at Chester.

I don’t say these are the only mile-and-a-half horses in the Derby, but they are the only ones which have proved in public that they can stay well enough to win a Derby.

Naturally, I have considerable faith in my own colt, Windsor Lad. At any rate, he has won over the distance, an attribute which cannot yet be paid even to Colombo. Windsor Lad is a much improved colt, and whatever his fate at Epsom those who back him can be assured of a great run for their money.

It must not be thought that I am minimising the chances of other horses, and in this connection I well recall the year when Manna, Colombo’s sire, won both the Guineas and Derby. In doing so he confounded many critics who regarded him as a non-stayer.

Despite their forebodings, he won the Guineas easily, and in the Derby, in heavy rain and deep mud, he won many lengths from Zionist and The Sirdar, with that brilliant colt Solario beaten out of a place.

Rarely has an Epsom crowd seen such a long trailing procession in the Derby as they did behind Colombo’s sire, that supposed non-stayer, Manna. And, remembering Manna, I am not going to join in the chorus of critics who fear for Colombo’s staying power. Let the race itself decide that point. As usual, the Derby sets a difficult puzzle, especially if you adopt the age-old pastime of trying to beat the favourite.

I think Windsor Lad will not be out of the first three. 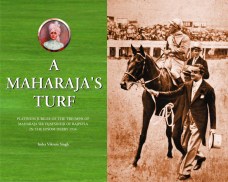